No meal services on domestic flights for 2 hour duration

As the second wave of Covid-19 intensifies, the Centre has said that onboard meals will not be allowed on flights with duration of under two hours, with a set of guidelines including staggered service, use of only disposable utensils, etc. to be followed by airlines in case of flights that are two hours or longer in duration. 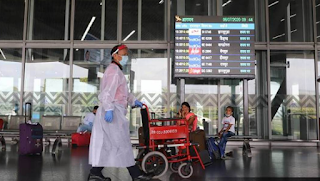 For flights longer than two hours, the government has asked airlines to serve meals in a staggered manner for adjacent seats as far as possible to reduce the incidence of a larger number of people in a flight removing masks together. “In all classes, tray set-up, plates and cutlery will be completely disposable with no re-use, or cleaned and disinfected rotables will be used,” the ministry noted in its order.

Airline executives expressed displeasure at the move but said they would implement the government’s orders. “On board meals is a significant revenue stream for airlines,” a senior executive at a low-cost airline said.